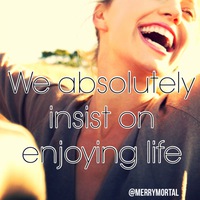 When I gave up alcohol, one of my greatest concerns was that I would no longer have fun. Even armed with the awareness that alcohol was my primary source of entertainment, I feared that sobriety would interfere with my capacity for enjoyment. Yes- I was grateful for a second chance at life, but was I fated to an existence where my happiness would be measured in Starbucks and the humor that is the unmanageability of my life?

Sobriety did this unexpected thing to me: it gave me a degree of seriousness that made the pursuit of fun quite challenging. I think I was so fearful of losing my sobriety that I became tense with the prospect of loosening up. Perhaps this is why I found myself drawn to another newcomer who was the complete opposite of me. While sincere in her efforts to stay sober, she rarely followed rules. She refused to wear shoes just for the hell of it. She wasn’t homeless or crazy; she just didn’t give a F%@$! I would stare at the black bottoms of her feet and think, “I could never do that.” Despite our differences, we became close friends. We shared a mutually beneficial relationship: I helped her behave more appropriately and responsibly, and she helped me have fun.

Side by side, we accumulated sober time and worked the steps. But our transformations would have been incomplete without all of the momentous memories shared. Together, we frequented karaoke bars, hosted parties, had one-too-many energy drinks, found ourselves in a wild medley of characters celebrating a bachelor party on a cruise, riotously competed against people three times our age at bingo, had dance parties in the car, stayed up all night crafting, spent sleepovers watching South Park, and we even got matching AA tattoos on a whim.

I will always treasure those early days when I was learning just how exciting and eventful sobriety could be. Today, fun looks a bit different for me. In many ways, those first few years of sobriety helped me to grow up. Not only did I learn a new way of thinking, but I discovered how to participate in life. The reality is that sometimes life is fun and sometimes it isn’t. In my early sobriety and during my active addiction, I relied on fun to experience that high of feeling good. For many of us, the enjoyment we experience as newcomers is the glue that binds us to AA. As we evolve however, we become acquainted with many other resources for happiness. For me, drinking Red Bull is no longer one of them.

With practice, I’ve become more aware of the accessibility of joy. I’ve learned the necessity of putting myself out there. Showing up at parties alone, dancing sober, going to new places, and making conversation seemed like insurmountable tasks at first. I’ve found however, that it is by stepping outside of my comfort zone that I experience the most gratification. There are certainly days when I prefer the comfortable cocoon of my habits and favorite things, but taking risks have undeniably changed my life for the better.

Perhaps you’ve been hushed by an old timer or dropped by a sponsor. Maybe you’ve created some messes by 13 stepping. Maybe you’ve even burned some bridges in the rooms. We’ve all been there and had to come to terms with the right balance of levity and gravity in recovery. One thing’s for sure though: we didn’t get sober to lead a lackluster existence. AA is where we practice living life, so why shouldn’t it also be a safe space for you to let your freak flag fly? As they say, we’re not a glum lot, and we absolutely insist on enjoying life.