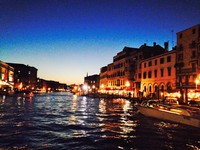 I recently visited Venice and was captivated by this majestic lagoon of splendor. Famous for its dazzling beauty and channels of romance, this shallow city was paradoxically built on fear. Seeking solace from the collapse of the Roman Empire in the fifth century, the early Venetians started anew in a landscape largely considered uninhabitable. Despite its geographic isolation and against all odds, the first inhabitants persevered; their sacrifices made possible what is now heralded as one of the most magnificent cities in all of the world.

The history of Venice reminds me of the cumbersome journey of sobriety. Previously regarded as masters of our fates, addiction strips alcoholics of all fortitude. Those of us who are lucky, find the willingness to go on; to take the unspeakable journey to the land of second chances. Not everyone who braves the path makes it, and others believe they can go back to the forgotten city and rewrite history. The visionaries that surrender their old lives in exchange for the promise land find peace, joy, and a new way of living where they can truly and unreservedly thrive.

I remember my own morsel of faith that erected the bridge to recovery. Like most of us when we come to AA, I was broken and beaten. I was out of ideas to make my city work and it was crumbling before my eyes. I feared I would be part of the rubble if I didn’t break out. Deserting everything I knew and entering into the unknown was terrifying. What if I failed? How could I live with myself? Panic-stricken with the thought of shouldering on alone, I bribed my only friends to join me, but they couldn’t be persuaded. In the end, I accepted the last companion less journey I would hopefully ever take.

Had it not been for my suffering- particularly my response to my suffering- I would have never gained access to the joy that awaits those of us who surrender. I don’t know why pain affects people differently; why some admit defeat while others remain stuck. I often think about this when I attend funerals, which is an unfortunate, uninvited consequence of getting to know people in the rooms. Have you ever noticed how poorly some people behave when someone dies? A couple of years ago, a dear friend- someone I met in the rooms- overdosed and commit suicide. A boisterous, beautiful, shining light in a dark room, she touched countless lives while sober and even while in her disease. I was horrified by the lack of attendance at her funeral. It was a tender reminder that even in sobriety, equipped with all of the tools AA gives us, pain affects people differently. In our best moments, if we are lucky, pain is an unwarranted minister of change.

In recovery, I can recall several painful experiences where I lacked the courage to show up as the best version of myself. I was chronically late to a job for the better part of eight years, because I didn’t value my time or worth (or anyone else’s.). I was unfaithful to a man I loved because I was scared to get honest about my needs. I shunned a sponsee because I didn’t know how to relate to her. I pushed my sister away by criticizing her mistakes because she reminded me of myself. Rather than pick up the spiritual tools laid at my feet, I clutched the ruins of my old life- otherwise known as Self.

Someone once told me that you can measure your recovery by your readiness to answer the phone. Am I too busy for a fellow sufferer? Has my life gotten too full to be of service to others? It’s easy to forget the desperation we once had- the early moments that motivated us to say, “Yes, I will do whatever it takes to stay sober!” Like the early Venetians who surrendered everything for the idea of a better life, we recovering alcoholics have to loosen our grips on our old perspectives; i.e.: fear of being without control, fear of the unknown, fear of being alone. Fear, our shared catalyst, is the agent for our foundation in recovery. Our willingness to grow however- especially outside our comfort zones, has the power to transform an uninhabitable island into a celebrated city.