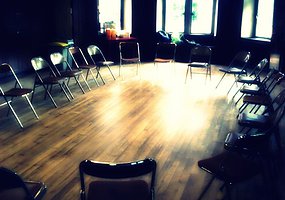 We as members of the 12 step community may or may not be familiar with the idea of " crossing our A’s.” Essentially that means a member of a specific 12 step group identifying as something that is not necessarily indicative of that set group. An example would be someone identifying as an addict in a meeting of Alcoholics Anonymous or as an alcoholic in a meeting of Narcotic's Anonymous. There are several schools of thought to be considered in retrospect to not only the recovery community, but also to the clientele of Oregon Trail Recovery.

I have certainly heard a other people tell me that they cannot identify with anything when they attend an AA meeting because they do not identify as an alcoholic. My usual response to this situation is to ask them a set of questions in which I hope they will identify with the subject matter of the meeting. These questions include asking them if they’ve ever tried replacing the word “Alcohol” with the word ‘Drugs?” I implore them to look back on their history of use because 9.9 times out of 10, someone who has an issue with meth, heroin etc. has probably drank a little in their past, and after all, the NA literature does state that “Alcohol is a drug.” I then would perhaps challenge that person to see that there is a high probability that they were drinking for effect, or they drank to get drunk, not to enjoy. This way they can have some chance at finding some common ground with the subject of whichever meeting they attend. This of course can work the other way around, with a person whose drug of choice was alcohol in an NA meeting.

Of course, in the realm of 12 step recovery groups, there exists a level of “group decided solidarity.” Several NA groups will specifically ask you NOT to identify as an alcoholic in their meetings. This is laid out at the start of the meeting by having someone read what is called The Clarity Statement. This statement outlines that by identifying as an addict, the message of NA does not become convoluted or confusing. On the other hand, several AA meetings will state at the start of the meeting that they are a “closed meeting of alcoholics anonymous” which essentially means that the only people who are allowed to attend are alcoholics and people who struggle with drinking.

The question becomes what are we as men and women of the recovery community to-do with this solidarity that exists amongst some (not all) NA/AA meetings? Could we not be at-risk of the having the general message of recovery become convoluted to our fellows? Honestly, I certainly think so. I make it a point to have an understanding that the 12 steps allow you to find recovery in whatever meeting you go to, be it NA, AA, CA, SA, SMA, HA and any other A out there! If we allow them to think that their disease is “better” or even “worse” than other’s they will be missing the general idea of recovery. They in turn will be missing a chance to develop a fellowship and a community around them.

Our common enemy is addiction and we strive to fight it and help others recover from whatever addiction that gets in the way of them having a wonderful life; a life which is happy, joyous and free.